skip to main | skip to sidebar

Chúcaro: Wild Pony of the Pampa, by Francis Kalnay 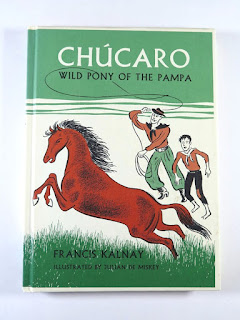 This book is at an excellent reading level for a beginning chapter book reader. It's short, with short chapters, and illustrated.

That said, I found this book difficult to get through. It sat around my house for so long that the owning library has threatened to bill me for it. It simply wasn't telling the story that was begging to be told, in my opinion, and nearly every other chapter was incidental to the plot.

I can summarize the entire plot for you (something I prefer not to do thoroughly, but I think I'm doing you a favor here).

Young Pedro lives on the plains of Argentina, an area populated by various sharecropping families. One day he catches sight of the most beautiful wild pony he has ever seen, and Juan (an adopted father to the boy) catches it for him tames it, and teaches Pedro to ride it.

One day the patrón sends word that he wants a good pony for his shiftless son upon their return, and the mayordomo has his eyes on Chúcaro (who was, after all, caught on the patrón's property). The sharecroppers figure out a solution: They will let the horse decide. If the patrón's son cannot lasso Chúcaro, he will remain with Pedro.

Of course, he can't, and is made a fool of. In a fit of anger he throws a set of bolas (think three bocce balls attached by a leather strap) at the pony's face, knocking it to the ground. When the boy approaches later, the pony gives him a good hard kick to the stomach. The boy accuses Juan of having ordered the pony to kick him, and when Juan defends himself, the patrón fires him for calling his son a liar and evicts him from the property.

Juan and Pedro ride off into the sunset forever to explore what other opportunities await elsewhere.

This is the story that took 127 pages to tell. You're welcome.

Posted by Melanie at 7:39 PM No comments:

The Horsecatcher, by Mari Sandoz 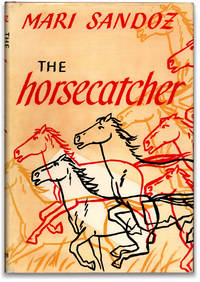 I always do a little research on the authors before writing up these blog entries, and Mari Sandoz sounds like someone I'd love to read an engaging biography of! The daughter of a pioneer, she was raised in Nebraska, and from her brief Wikipedia entry, would have had amazing stories to tell. Although not of Native American descent, she apparently admired the cultures of the plains Indians, and they feature in many of her books, including this one.

Young Elk is a young Cheyenne who is drawn to the capture and care of horses, despite the fact that it is often to his detriment. Although his village's elderly horse catcher has earned respect for his role, there is much less place for a young man who hasn't earned prestige through battle. But despite the pressure put on him by society and family, he often slips off to track and gentle horses- both wild and belonging to enemy tribes.

I enjoyed the story quite a bit, but what I enjoyed more was the author's gentle way of teaching us aspects of Cheyenne (and cross-tribal) culture without being heavy-handed. She clearly studied familiar and cultural interactions very carefully, and it helps put the reader into the story.

Along Came a Dog, by Meindert DeJong 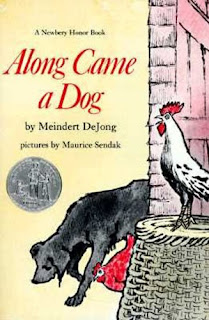 I should have enjoyed this book more, probably, but it described farm life in such a blunt way that I found it incredibly off-putting and it was difficult for me.

"The man" works for a farmer but has a flock of chickens that he cares for. As winter is ending, he discovers that his little red hen HAS FROZEN ALL OF HER TOES and they literally drop off as she tries to walk. The book contains other upsetting descriptions of the chicken trying to hobble along on her little ankle nubbins and care for herself among a flock that immediately demotes her to the bottom of the pecking order.

But the real protagonist of this story is a stray dog, who wanders into the barnyard hoping to find a home there, since he can sense that The man is good and kind to animals. He sets himself up as the secret guardian of the little red hen and spends the book defending her (and by extension, all the flock) and hoping he will eventually be welcomed into the farm family, although the man does catch him twice and abandon him far away.

It's just an animal story for a different time that didn't speak to me in the way it was meant to.

Posted by Melanie at 8:47 PM No comments:

The Family Under the Bridge, by Natalie Savage Carlson 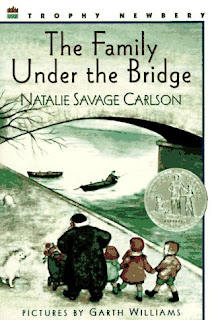 This is a charming little story about Armand, a "hobo" in Paris, who loves his free life. But one day he returns to his usual spot under a bridge to find that another family has claimed it- three redheaded children whose mother is at work. After their father's death they could no longer afford their apartment, and are hiding so that they won't be put into an orphanage and be separated from their mother, and each other. Armand is a bit ruffled at having his spot taken, but the children seem more than happy to absorb him into "their" space and claim him as an unofficial grandfather. The children think that singing to earn change for treats and meeting Armand's friends the gypsies are a marvelous adventure, but their mother takes offense and tries to keep the children away from him. Nonetheless, it seems that they are meant to be family, and the story ends happily for all.
Posted by Melanie at 10:45 AM No comments:

The Great Wheel, by Robert Lawson 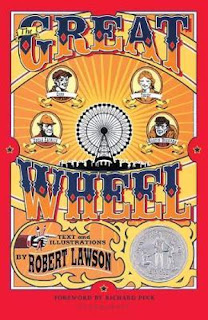 For those of you following the tags, this one isn't technically about pioneers; it's more about immigrants. But it was the closest tag, so hey!

The Great Wheel follows young Conn (short for Cornelius) from Ireland to the United States in search of his future, and the resolution of his aunt Honora's prophecy for him, read from leaves in the bottom of a tea cup: "Your fortune lies to the west. Keep your face to the sunset and follow the evening star, and one day you'll ride the greatest wheel in all the world." He initially works for his uncle in New York, who owns a contracting company. But he decides digging ditches and laying piping, and accounting work in the office, aren't for him. At 17, when he has the opportunity, he decides to join his other uncle, Patrick, in Chicago. He's working on an amazing piece of machinery that will become the showpiece of the world's fair: the first ever Ferris wheel. And at two-hundred-fifty feet in height, other engineers are claiming that it simply can't be done. But Patrick has faith in Ferris, the designer, and Conn has faith in uncle Patrick.

And so we follow Conn and his companions in the months leading up to the Ferris wheel's opening, as they build the tremendous wheel from the ground up. But always in the background is the question of what will become of Conn once his work is finished: does he even want to continue working in construction? And if not, what will his future be?

This was a straightforward and pleasant read that I was able to knock out in an afternoon.
Posted by Melanie at 7:49 PM No comments:

This one is a charming summer read that most children should enjoy, I'd think. Every year, Portia and her younger brother Foster go to visit her aunt and uncle, and cousin Julian, in the countryside. Portia and Julian, being closer in age, are close friends and spend a lot of time exploring.

One day, while rambling through the woods, Portia and Julian come across a giant swamp. Julian plunges into the reeds in search of rare butterflies. When the two emerge, they see a number of huge, but decrepit, estate houses. When they go closer to explore, they meet an old man and woman, siblings, dressed in turn-of-the century clothing. Mr. Pindar Payton and Mrs. Minnehaha Cheever are the only occupants of this isolated neighborhood, and rarely leave, but they're nonetheless thrilled to enjoy the company of the two children. They also share the secret of Gone-Away Lake: at one time, the area had been a thriving summer community for the wealthy. But mud started to overtake the lake, and once it became too swampy for recreation, the families boarded up their homes, most with their furnishings still inside, and never returned.

After living their adult lives, Mr. Payton and Mrs. Cheever decided to return to this isolated place and live in the old fashioned way, with no modern technology, and poaching whatever furnishings they needed (and an antique vehicle!) from the other houses. Since all other homes are unoccupied, the elderly pair invite the two children to choose one of them to use as a play house so they can visit frequently. Portia and Julian select an attic and clean it thoroughly, and it becomes their clubhouse during that one magic summer.

What child wouldn't love this setup?
Posted by Melanie at 4:49 PM No comments:

Rifles for Waitie, by Harold Keith 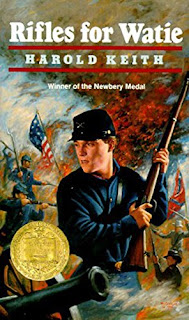 I feel like this book has been in every 4th-6th grade classroom ever. It was the sort of book that was always just . . . around. No one directly encouraged me to read it but the pressure was always there by its very presence. Looking at the cover with my inexperienced kid brain, it just looked like one more book about some young boy running off the join the Revolutionary War and with one notable exception (My Brother Sam Is Dead, I'm looking at you) boys-caught-up-in-war books did not appeal to me and were overused in the curriculum, so I intentionally ignored this one with a clear conscience.

Let it be said firstly that this is a book about the Civil War, not the Revolutionary. And it does have an interesting perspective, taking place around the Missouri/Kansas border. I did gain some interesting insights about how the war looked in that part of the country, as opposed to the East Coast as usual. However, this is just not my genre and I found myself skimming to get to the end. If this blog used a "coming of age" tag, it would be aptly applied here.
Posted by Melanie at 4:39 PM No comments:

Our Reviews By Year

What else we're reading

Melanie: The Spirit Catches You and You Fall Down, by Anne Fadiman